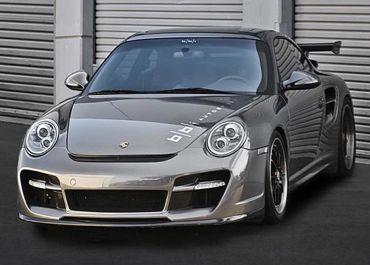 The 997.2 Porsche Turbo may have been labeled a "facelift" model but the engine is another major evolutionary leap forward in Porsche's coveted Turbo history. This 7th generation Turbo engine, titled the 9A1, delivers 500 HP (530 HP in the "S") and once again, raises the performance bar in the sports car world.

Porsche retained the VTG turbos from the 997.1 Turbo, but increased the displacement from 3.6 to 3.8 and implemented their proven DFI technology. This completely brand new engine runs fewer mechanical parts which reduces internal parasitic drag. The new 9A1 eliminates intermediate shaft, cam decks and even sheds the water box. The engine benefits from a completely brand new case design that now incorporates the cylinders into the case.

This new 9A1 power plant is another new benchmark for Porsche efficiency, agility, responsiveness and performance. This engine is an engineering marvel so much so that it is even less tuner friendly than the previous 997.1 Turbo. The efficiency of the DFI engines (both Turbo and NA) have proven to be a very challenging proposition for even the most talented of Porsche tuners, but IPD has painstakingly developed another great Plenum for the brand new Turbo. 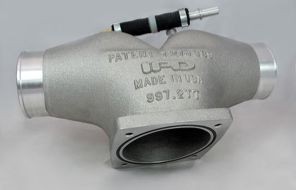 The IPD Plenums continue to deliver the best bang for the buck in the Porsche performance market and the IPD Plenums tend to perform even better with turbo applications. Countless 996 and 997.1 Turbo Plenums have been sold over the years with great success and rave reviews. After extensive design variations and development the new 997.2 Turbo Plenum appears to be another worthy performance upgrade from IPD.

The 997.2 IPD Turbo Plenum develops power gains throughout both power and torque curves without dipping below the factory curves. As with most IPD Plenums, the bulk of the power is seen and felt in the midrange. The patented design of the "Y" style IPD Plenum improves boost response and increases air flow for substantial performance gains. Each of the drivers from the Turbo "test mules" reported "quicker boost response and noticeable horsepower and torque increases throughout the entire power band, especially in the midrange."

The new 997.2 IPD Turbo Plenum was considerably more difficult to design and develop than previous Plenums. The good news is that all these efforts have yielded a much easier installation process than previous Turbo Plenums. The new IPD Turbo Plenum is offered in one single 74mm version which utilizes the factory 74mm throttle body. The 997.2 Turbo intake manifolds are smaller than the 997.1 Turbo manifolds which is great for improved boost response and gas mileage but less than ideal for making substantial power gains. The 74mm TB provides more than adequate flow for these more restrictive intake runners eliminating the need for a larger 82mm "Competition" version.