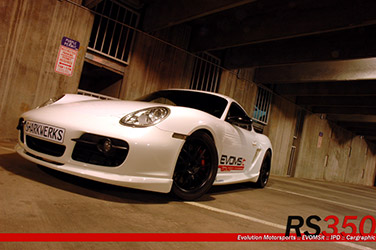 The canyon carving mid engine platform of the Cayman fills a void in the Porsche line up once dedicated to the "Hill Climbing" audience. Famed Porsches like the 550 Spyder, 718 RSK, RS 60, RS 61, RS 62 and the 904 were designed to deliver incredible performance in small lightweight packages. The Cayman delivers a driving experience on par with these legendary and celebrated sports cars.

Unfortunately the Caymans were "de-tuned" and delivered under powered so as not to threaten, or possibly even dethrone, the Carrera's patriarchal position in the Porsche family hierarchy. Although the Carrera's performance can be much improved upon with typically performance upgrades, the Cayman absolutely comes alive with an equivalent upgrade package.

The authoritive Porsche publication of North America, Excellence magazine, was quoted as saying, "The RS350 is one of the best modern Porsches we've driven on the loop, and the best 987.... Maybe that's why it always keeps pace with the far more powerful 997s and 997 Turbo."

The RS350 was definitely the "under dog" of the group, both in terms of mods installed as well as overall out-of-the-box power. Drivers of all 3 cars unanimously agreed that, had the Cayman been equipped with an LSD and/or Moton dampers (like the other cars tested) "the Cayman might move from merely one of the best-handling Porsches we've tested on the loop to top dog......an amazing feat considering the money involved."

IPD always enjoys working together with top Porsche tuners and helping develop new performance packages. This process is never more rewarding than when working together with the talented guys at Shark Werks and Evolution Motorsports. The success of the RS350 Cayman project was the direct result of dedicated team work combined with uncompromised development, relentless tuning and a passion for Porsches and making them perform even better.

There are many different performance packages available for the Cayman but the best ones on the market have one thing in common, they all utilize the IPD Plenum. The IPD Plenum out performs every other intake system on the market. Don't be fooled by other competitors claiming to offer Plenums. All factory Porsche air distributors are of the "T" variety and therefore suffer from less than ideal air flow, intake air speed and total performance. The Shark Werks RS350 packages comes with the Competition IPD Plenum that is specifically design to accept the larger Porsche 82mm throttle body from the 997 GT3 RS.

IPD would once again like to thank Shark Werks for their commitment and over-the-top effort in making the ultimate Street Cayman S capable of terrorizing any track, the RS350 Cayman.