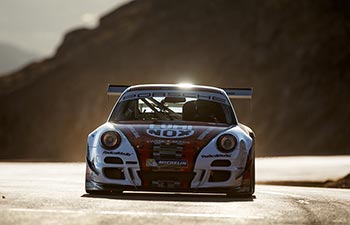 The Pikes Peak International Hill Climb is the second-oldest motorsports event in America (second only to the Indianapolis 500). First contested in 1916, this year marked the 92nd running of the annual "Race to the Clouds." This 12.42-mile course with 156 turns is now fully paved making the GT3 Cup Car the perfect weapon for an assault against this unforgiving 14,114 foot monster of a mountain. 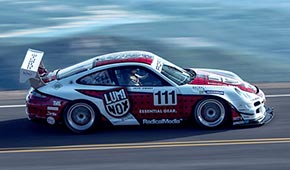 This year Jeff returned with the same BBI Autosport prepared 997 Turbo Cup Car and a burning desire to not only conquer, but dominate this year's Time Attack class. The heavily modified Cup Car received a variety of upgrades including a more compliant chassis, re-geared transmission and some specially flown in Michelin rubber better suited for this very unique motorsport venue. The IPD Plenum installed on this mountain climbing beast remained the 82mm 997.1 Competition Turbo Plenum.

Jeff, the BBI crew and the 997 Turbo Cup Car were locked, loaded and aiming for the sky at this years annual Pikes Peak International Hill Climb race. All of the diligent race pre-prep paid off with smooth test sessions, pole position and record breaking qualifying times. The entire week leading up to race day was virtually flawless. Even mother nature offered her blessing with ideal racing conditions. 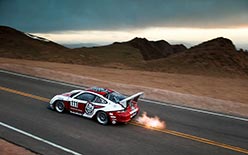 "Our decision to run the 2010 Porsche 911 GT3 Cup, the most balanced car I have ever run at Pikes Peak, in conjunction with the Porsche 911 Turbo motor, the best power I have ever felt at the Mountain, was based on the data that showed the turbo delivered the most even power at both the bottom and the top of the mountain. This solved the high elevation horsepower starvation that occurs in normally-aspirated cars," said Zwart.

On race day the 997 Turbo Cup Car continued to run and perform flawlessly. The car took off like a fire breathing dragon headed for the sky. All of the split sector times had Jeff on track to shatter the Time Attack class record. The flawless week continued as Jeff approached the half way point with all systems still "Go". Just after halfway, the car started to experienced intermittent power, especially coming out the tighter second and third gear corners at full throttle. Like any talented race car driver, Jeff adjusted his driving to adapt to the changing car. More momentum was required through the turns in order to avoid what later was discovered to be a faulty in-tank fuel pump. Jeff doubted he would summit the peak but continued to press hard and drive around the fuel starvation issue. When he finally nursed the fuel thirsty car across the finished line Jeff and the BBI Autosport team had to settle for a disappointing second place by a painful 1.2 seconds.

We look forward to watching Jeff and the BBI team redeem themselves at Pikes Peak in 2015.