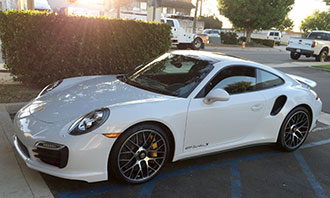 IPD has just acquired a brand new 991 Turbo S for continued product development. The IPD Plenum for the 991 Turbo has already been available for a few months and has received universal praise for it's performance improvements over the already physics defying new Turbo. Click here to learn more about the 991 Turbo Plenum.

The 991 Turbo Y-Pipe is a completely different animal and a massive departure from previous Turbo model Y-Pipes. In typical IPD fashion, we will be designing a cast aluminum Y-Pipe which allows us to manipulate a variety of shapes, contours, bends and interior surfacing that is not possible with conventional tubing and fabrication. This will not be a cast reproduction of the factory Y pipe but a complete re-design from scratch, developed to deliver even greater air flow for both stock and highly modified Turbos. This will of course be a "bolt on" performance upgrade utilizing factory mounting points and requiring no modifications.

As with any Turbo application, bigger isn't always better and the goal is to always develop a Y-Pipe that delivers optimum flow and air velocity without being so large as to cause pressure drop inside the inlet track and/or reduced boost response and ultimately less than ideal performance. No one needs an after-market products that deliver power gains at 6000 rpm but looses power below 5000 rpm. Performance gains should be realized throughout the entire power curves and deliver very usable and streetable power.

We will be testing a few different Y-Pipe designs for the new Turbo during the 2014 holiday season and should be going into production sometime in January. Baring any major issues during the manufacturing process, production IPD Y-Pipes should be available for purchase in February. 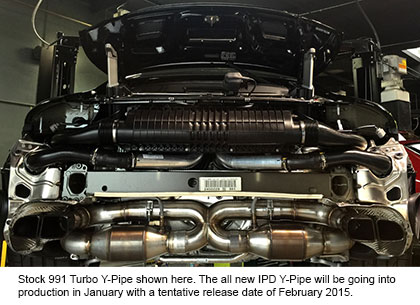