IPD's continual quest for improved performance has led to many innovative designs and developments over the years. Once these new ideas are tested and proven to deliver quantifiable performance gains they are then employed in the manufacturing process for future production components.

The fundamental purpose of a plenum is to deliver as much air as possible through a maze of ducts while requiring the least amount of work. IPD has tested numerous internal surfaces inside the Plenum, including polishing, extrude honing, epoxy coating, and shot peening just to name a few. We spend countless hours developing our product and we have finally been able to perfect a dimpling effect that shows gains over our previous attempts. 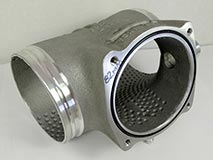 Fundamentally dimpling, akin to a golf ball, creates a thin turbulent boundary layer on the flow surface. The theory behind a golf ball is to keep the air stuck to the back of the ball as long as possible to reduce the wake - and increase pressure behind the ball - while traveling through the air to maximize distance. A similar principal applies in a Porsche plenum, where air travels through a tightly constructed intake to meet the extreme packaging constraints of our rear (and mid!) engine friends. By dimpling the interior surface, there are fewer localized pressure drops around compound curves, thereby increasing the flow. In this case, the theory matches the dyno and we are pleased to announce our latest iteration of the plenum.

You can plan on seeing more dimpled surfacing with both new an older IPD Plenums in the future. 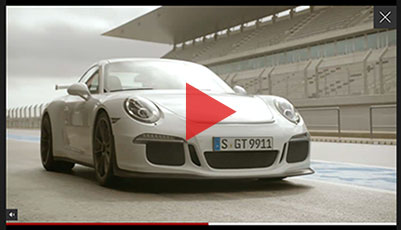 The Porsche GT3 is without question the greatest sports car ever designed and developed for dedicated driving enthusiasts. The GT3 has become an industry benchmark that all other sport car manufacturers measure against since it's introduction in 1999. GT3's continue to re-set the performance bar with each successive model and the brand new 991 GT3 appears to be continuing this tradition. GT3's are dedicated track focused machines designed to deliver razor sharp handling, braking and acceleration. But some purists have argued that GT3's have become "soft" and have lost their "edge" in recent years. Original GT3's lacked creature comforts, driver's aids and weight handicaps. The new 991 GT3 might be the fastest GT3 to date, but it's uber performance comes with cutting edge technology that some consider a departure from everything the GT3 represents. I guess time will tell. Until then, we'll just have to enjoy this intoxicating GT3 "teaser" video produced with pure Porsche passion that will make you wonder how you ever survived without owning a new 991 GT3.