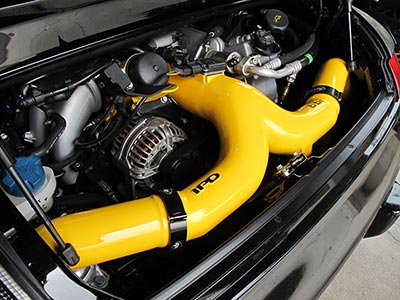 The venerable 996 Turbo has earned universal critical acclaim for it's staggering out-of-the-box performance since it's launch in 2000 (2001 in the US). The 996 Turbo reigned as king until the current 997 Turbo debuted in late 2006. Although the 997 Variant of the Turbo is more capable and superior than it's older 996 brother in stock form, the earlier Turbo has proven to become an iconic favorite of Porsche tuners around the world.

IPD has invested countless hours in designing, developing, dynoing and delivering impressive power gains for the Tuner Friendly 996 Turbo for almost a decade. IPD has continued to raise the bar on the 996 Turbo in a collaborative effort with BBI Autosport. This joint venture has yielded the unique and extreme "Push Through Y Pipe".

to a level beyond most tuners capabilities and comfort zones, which has gained them recognition as one of the premier European tuners in the US. BBI has had the proverbial "pedal to the metal" creating custom Porsche packages for Porschephiles and driving enthusiasts since opening it's garage doors in 2005.

According to Betim at BBI, "The cast Push Through Y Pipe is a very versatile component of the overall boost strategy that ties the turbo package together. One of the best things about the Push Through is that it can be used on Turbos developing 600 to 1000+ WHP without compromise. We initially dynoed the first unit 3 days before showing up at the Texas Mile. Our goal was to break the 200 MPH barrier being our first time at the Mile, but ended up posting a 221.2 MPH on our third run with a slipping clutch."

At the moment, there are four 996 Turbos outfitted with the IPD / BBI Push Through Y Pipes sitting inside the BBI Autosport shop with a combined power output of 4200 Crank HP. Betim added, "We have installed 10 Push Through systems on customer cars, all with great success. These are very hardcore enthusiasts who demand incredible performance without compromising drive-ability and the Push Through Y Pipe is a critical component of this proven package."

In closing, Betim summarized the Push Through joint venture with, "The marriage between BBI and IPD during this Push Through Project worked great since both companies share a mutual passion for the relentless pursuit of offering the highest quality performance packages in the Porsche after-market industry."

These Push Through Y Pipes are in stock and available through both IPD or BBI.

To learn more about the technical details behind the Push Through Y Pipe click here.